I recently spent four fascinating days in Papua New Guinea, helping to get more women into parliament in the upcoming elections.

When my PNG Greens colleague, the indomitable Dorothy Tekwie, called for support for her bid to be elected in her home electorate of Vanimo Green province, and to promote the election of women candidates throughout her country, WA Greens Senator Rachel Siewert and I were ready volunteers. 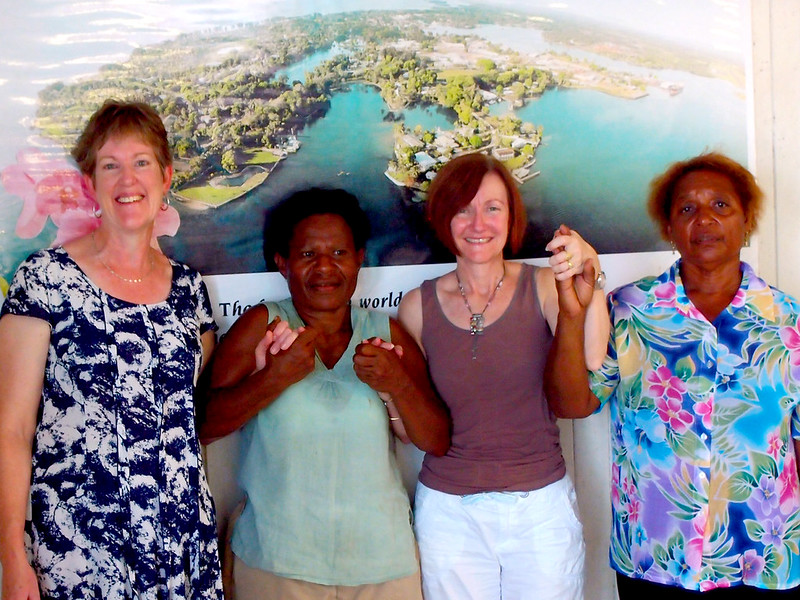 Above: Rachel and I with two of the wonderful women standing for election in the PNG elections, Josephine Mandaewe (L) and Dorothy Tekwie (R)

I've had a place in my heart for this fascinating country since I visited as a teenager. So, forty years later, I was very happy to return to support Dorothy and the 135 female candidates standing in what is still a very patriarchal society where "Big Man politics" prevail.

Dorothy's main contestant in Vanimo Green is the current Deputy Prime Minister, Belden Namah. It's a David and Goliath battle, given his immense wealth and reputation for doing what it takes to achieve and retain power, but she has a serious chance.

The current situation for women is very dispiriting. Of the 110 seat legislature, the only current female MP, the respected Dame Carol Kidu, is set to retire at this election. In February, a much anticipated bill to reserve 22 seats in the parliament for women was disappointingly defeated by several votes, after 21 members walked out. The need for more women in the parliament of Papua New Guinea is absolutely pressing.

The stakes are high. PNG faces great challenges if it is to make inroads out of poverty and into education and a fair distribution of the wealth from its many natural resources. Unfortunately, unless there is a serious improvement in governance, it will continue to be foreign companies and shareholders (and a few well-placed locals) who reap the benefits, while school attendance and health services - and all the other indicators of wellbeing - will remain low.

The challenges of campaigning "PNG style" cannot be underestimated. In some ways, similar to Australia - resources, transport issues, getting the message out - but magnified a hundredfold. In PNG campaign tactics may also include vote buying and intimidation from incredibly well-resourced and sometimes seriously desperate opponents.

Rachel Siewert and I arrived in Madang to a traditional "sing sing" welcome in our honour then set off on a thrilling trip into the mountains, accompanied by a bunch of female - and male - supporters. Our journey took us along steep, twisting, treacherously potholed roads, bordered by thick jungle.

Returning home in the dark with a precariously empty petrol tank, barely able to see the road because of Monsoonal-strength downpours and running the risk of unwelcome attention from "rascal gangs", added a frisson of excitement that we don't usually encounter on the campaign trail in Australia!

But what a day! Stopping at markets along the way, Dorothy and Josephine Mandaewe, a feisty, principled candidate for the Ursino Bundi electorate, whipped out their trusty megaphone and rallied the crowds by sheer force of passion and oratory. It was inspiring to see the onlookers transformed from mildly curious to enthusiastic and excited as they suddenly glimpsed the possibilities for change if they were to vote in politicians who acted for the community interest rather than their own.

Rachel and I spoke out, too, testifying to the benefits of having numbers of women in the Australian parliament, influencing policy and lawmaking. My rudimentary attempts to "tok pisin" (speak pidgin English) elicited some amusement then approval.

Environmental issues loom huge on the PNG landscape, with abundant natural resources being logged, mined and fished at a pace of knots. Dislocation of communities, tensions about landowner rights, serious pollution and failure to get a fair return from the resources are all issues that are raising more and more concern among the populace.

In a place where many of the male incumbents are immensely wealthy, most female candidates have only the power of conviction and tenacity.

Despite these many challenges, Papua New Guineans love democracy.

It is to their great credit that they came through their recent constitutional crisis without bloodshed on the streets. Attempts by some players to defer the elections were met by staunch resistance and the elections remain on track to be held for two weeks from 23 June.

On 13 May young people organized a walk for Free, Fair and Safe Elections through the streets of Port Moresby.

In the context of more than 800 language groups, intensely diverse cultures and some of the most mountainous and isolated terrain on the planet, they go to extraordinary lengths to conduct ballots in farflung electorates and individuals are prepared to walk huge distances to cast their votes.

I was proud to see the role Australia is playing in assisting with the conduct of these elections, at the request of the PNG authorities - lending a hand in the distribution and collection of ballot papers (by helicopter and aircraft) and providing other significant logistical support for the PNG Electoral Commission.

The female candidates we spoke with are keen to see widespread monitoring and the presence of independent observers in the process, and the introduction of separate polling places for women and men, to reduce the degree of intimidation which can occur.

I feel incredibly privileged to have participated briefly in what is a robust - if challenging - process. I acknowledge Dorothy Tekwie, Josephine Mandaewe and the other courageous candidates who are willing to stand by their principles in such a volatile environment and my best wishes are with them at this important time.

I sincerely hope that "all mary make im change" and that we will see Dorothy and a good number of other women candidates elected to the PNG parliament in 2012.